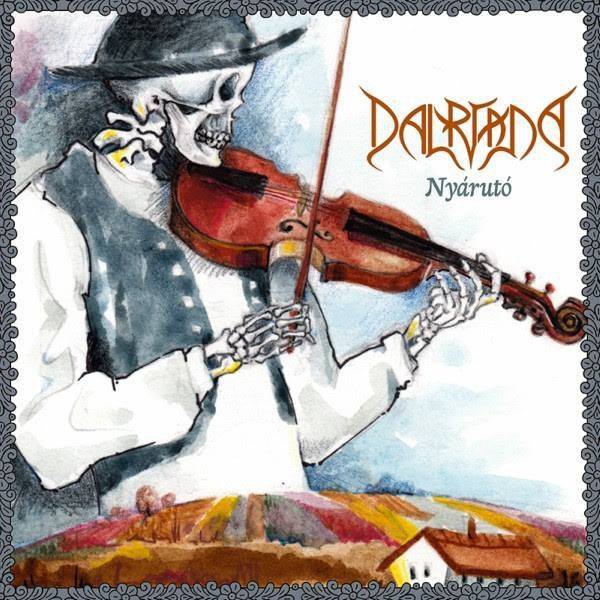 After being recommended the new Dalriada album by my friend “Doomface” (Lee), I was surprised to learn that I had never heard of this band until just now, and this is their 10th studio album!

Dalriada are a Hungarian folk metal band who have both female and male vocals, and the male vocals alternate between clean and harsh.

The first track Megöltek egy legényt begins peacefully, with a woodwind and stringed introduction, but this is soon taken over by a quick, fast paced orchestration which makes you want to dance around the room. There are clean female and male vocals, and there are alternative female and male vocal harmonies. These alternate vocals are heard throughout the album. There are some carousel elements in this track too.
The energy is kept up in the second track Hollórege, which also has some woodwind and guitar harmonies intermixed in the song, and there’s also a cheeky gallop thrown in there for good measure.

The third track, Tóltosok álma, is heavier and more guitar driven. The harsh vocals are a lot more dominant in this track, and it is definitely a change in pace from the first two tracks. I can hear some elements of Ensiferum in this track.

The title track, Nyárutó, is an eight minute journey of a song. It starts with the sound of a galloping horse, then tribal drums, then a solo violin, followed by pipes/flute and acoustic guitar. The more traditional metal instruments then come in, with group vocals. There are lots of instrumentals in this track. There are dual woodwind and guitar melodies, guitar solos, pipe solos, and violin and piano harmonies throughout.

Thury György Balladája 1. rész has more of a ballad feel, with a woodwind introduction and solos throughout, and there are clean female and male vocals throughout. A short church organ interlude leads into part 2 of this tale, which begins with a clattering of swords, and leads into fast violins and a more upbeat feel to that of the first part.

The penultimate track, Áldja meg as Isten, ends with an almost sorrowful struggle, like the end of a long journey. I can hear some elements of Heidevolk in the first half of the track. The final song, Hajnali, a short folk melody, and you can definitely hear the Eastern European element here. It feels like something that would be played at the end of the night in a tavern, signalling everyone to go home.

This album is generally pretty fantastic. There are a good mix of folk elements as well as heavier, more traditional metal. There are songs to dance and jig to as well as songs to headbang to. You can definitely hear the Eastern European folk influence, particularly in Búsirató and Komámasszon. I do feel that sometimes the songs can be a little disjointed, there is some element of progressive metal in here as well, which isn’t to my personal taste, but it doesn’t detract too much from the enjoyment of the album. It’s certainly given me a new band to look into and discover more.