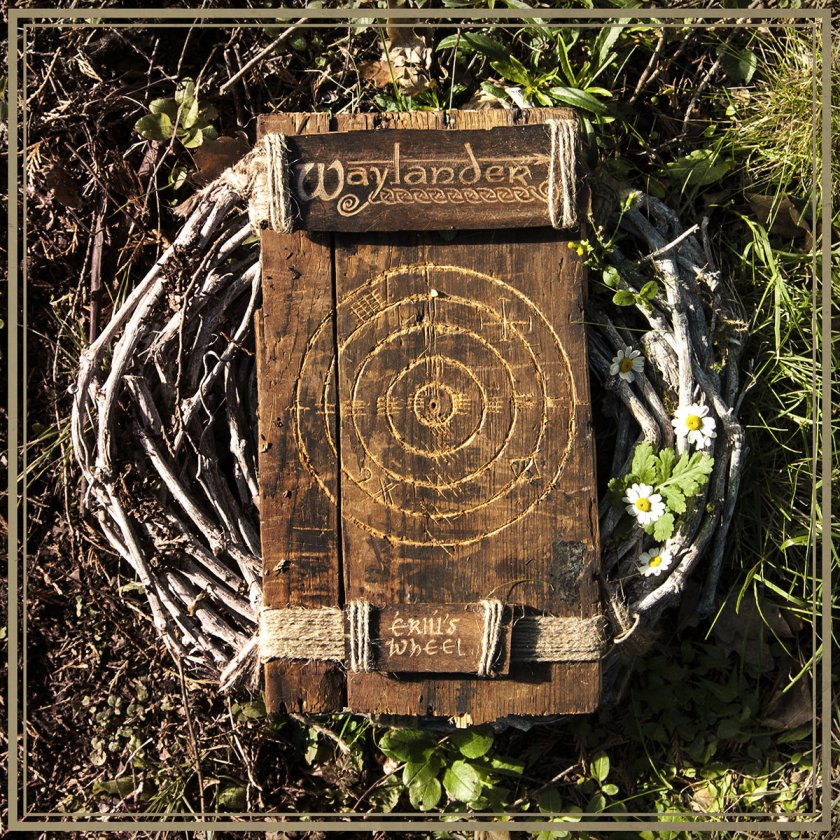 Waylander are an Irish pagan metal band who have been around for a good while now, but it is only recently that I have come to be more familiar with them. I first saw them live at HRH Vikings in December 2018, and I was very kindly sent the tracks from their latest offering Ériú’s Wheel which will be released on 22nd March 2019. The album consists of tracks which each relate to a different pagan festival. I was excited to give this a listen.

The listener is greeted by a crackling fire, and piano, guitar and flute begin a calming melody. The short introductory track features spoken word, with whispers in the background. We are about to be taken on a journey of the pagan year. Samhain kicks us off with the full band, including flutes, and harsh vocals. The instrumental sounds like it is building up to something, however I just feel like it needs a tiny bit more from the bass tones. I get an Eluveitie feel from the instrumental, and the flute blends well with the rest of the instrumental. I have said a few times before that sometimes folk instruments can just be layered on top as an afterthought, but Waylander incorporate the flutes so well that it would feel like something was missing from the music if they weren’t there.

We then enter the Shortest Day, Longest Night. A wind is howling, and a storm is brewing, and there is something a little unnerving about the atmosphere. The flute comes in quietly at first, and then starts to compete with the storm. The track has a slower pace at first, and clean vocals, but then the pace soon picks up, and we have a heavier track than Samhain. There are definitely some black metal influences in the instrumental. Imbolc starts with guitar, and becomes a little bit more of a folky track to start, but we soon get back the heavier, grittier black metal style. Especially in this track you can hear the emotion behind the flute melody. There are some calmer points in the track, and then we get the more folky melodies back before the track fades out.

The Vernal Dance has a slightly more uplifting feel overall, being introduced by acoustic guitar, bells, and flute. It has a bit of a waltz feel to it, and we again have some more spoken word. There are heavier sections and more lilting sections to the track, and even a section that’s ripe for a pit when the track is played live. Beltine has another acoustic introduction, with a drone in the background. When it kicks in, it starts out as the folkiest track so far, transitioning into a heavier instrumental ripe for some good old headbanging. The chorus is more folky, and there is some more acoustic elements accompanied by spoken word.

A flute melody introduces As The Sun Stands Still, accompanied by the full band. There is a catchy, singalong chorus, and more acoustic sections with flute, acoustic guitar and spoken word. The track builds up towards the end, becoming a little more chaotic, and the tempo increases. It’s wonderful To Feast At Lughnasadh, with guitar and drums building up, and the guitar having a hint of a nice little jiggy melody. The guitar and flute take the same melody, and overall the track feels like it’s another one ripe for a pit live. There is a nice interlude with guitar, flute, and spoken word before it build to the full band again.

The final track, and first release, from Ériú’s Wheel is Autumnal Blaze. There is acoustic guitar and drums to start us off, and there is a more rock ‘n’ roll feel to the instrumental. There are also some heavy, headbanging sections, again a pit wouldn’t be out of place. There is some chanting throughout the track, and it ends on that chanting, and a final note held by the flute.

As many of you know, I am very much into my happy, jiggy folk metal, so quite often this kind of pagan metal doesn’t often come up on my playlists. However, this album may need to be an exception. The album takes you on a journey through the pagan year, and each track feels like it is reflecting the festival it tells the tale of. I will be getting the chance to see Waylander again soon, as I believe they are playing Warhorns Festival this year, and if their date hasn’t changed, I believe they’ll be playing on my birthday!