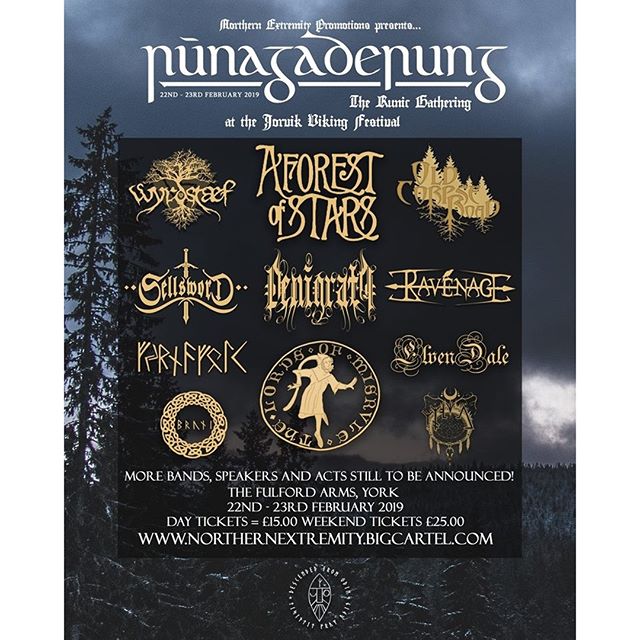 Rúnagaderung – The Runic Gathering is a new part of the Jorvik Viking Festival, replacing the previous Friday night metal show, which saw the likes of Týr and Moonsorrow come to York. The event has changed as Northern Extremity Promotions have taken over, leading to a smaller event (as 2018’s show headlined by Isarnos), but not taking away any of the family and community atmosphere that such shows usually have.
Unfortunately I will not be at this year’s event, as I will be at Wacken Winter Nights which is the same weekend, but as much as possible I like to promote local and smaller events which heavily rely on the support of people buying tickets and merch to carry on, particularly with the threat of venue closures across the UK.

There are a lot of familiar bands as well as some lesser-known to the metal community in the UK on the lineup, so I’ve taken a selection of eight acts which are a mix of those familiar and new to me.

Bruni are a local York act who perform their own interpretations of traditional and folk songs. I had not heard of them before seeing the lineup for Runagaderung, but they are certainly an act I’d love to see perform live. The vocals are beautiful and the violin is almost haunting. It’s the kind of relaxing folk music I enjoy.

YYLVA is a one woman-project of Clare Webster, who also runs Unseelie PR and is the vocal talent of Edenfall. While her album includes a full band, her live show is Clare, a harp, and her beautiful voice. Her lyrical themes focus on myths and legends, and of folklore. After seeing her open for Grimner in Nottingham, she is certainly an act to take the time to watch.

ElvenDale are another act I have not heard of, as unfortunately for me I don’t keep up with the more acoustic folk acts (I need to). From what I’ve heard though, they are another acoustic act using traditional instruments and Viking, Saxon and Germanic folklore to compose the music. The vocals are against beautiful and relaxing, and I hope that I get the opportunity to see a live performance at some point.

Old Corpse Road are a great black metal act from the North of England, using English folklore as the inspiration for their lyrical content. Their music is atmospheric and foreboding, and their live show matches this. I have seen Old Corpse Road a few times now and they always put on a great performance.

York locals Sellsword are slowly building a bigger fanbase, with their last major performance at Bloodstock Festival 2018, where they had an absolutely incredible reception. With their own brand of mercenary metal and high energy performances, they are not a band to be missed. Hopefully we’ll be hearing a new album from them in the near future.

Ravenage have been around for quite a while now, and have recently begun the writing process after a several year break since their last release. They have catchy songs about Vikings and drinking, though their latest stage attire might not quite fit the Viking lyrics, they’re certainly suited and booted for the occasion.

Once again I’ll be missing my friends in Wyrdstæf. I missed their inaugral performance in late September, and as I will be in Germany during this festival, I will also be missing this. I’m hoping to catch them later in the year, but I have heard only good things about them. Headed by Northern Extremity Promotions head Connor Sanders, they fuse ancient instruments and brutal heavy metal to bring you paleolithic metal at its finest.

Call of Fenrir are a band I have heard of but not really heard. From what I have heard, they have a strong folk metal sound combined with harsh vocals, giving a sound that reminds me of Ensiferum. I hope one day that I can catch them live as they sound like they are right up my street music-wise.

If you’re in the UK and happen to find yourself around York for the Jorvik Festival, I strongly recommend that you add this event to your schedule. I have never known a Northern Extremity event to be bad. The acts over the weekend are amazing, and I can be sure that it will be well organised. Show your support for these UK bands, and get your dose of metal amongst all those Vikings.