On a cold March evening in Nottingham, as the snow began to fall, a small group of metalheads gathered in the upstairs chapel of a brewery and pub, waiting for a folk metal party to warm their souls. The legions of YYLVA, Atorc, Isarnos and Grimner gathered, and the lights went down.

The Chapel at the Angel Microbrewery was small, with a pulpit at the back which held the sound desk, and an organ just inside the door held high on metal chains from the ceiling. The stage was small, but fairly deep. There was a small bar in a separate room at the back of the venue, and not only did this provide alcoholic beverages, it also provided a cosy room for the Heavy Metal Entertainment guys to interview Grimner.

The first act on was YYLVA, a solo act with only a harp and her vocals. And wow, her vocals were incredible. She has such a strong operatic voice. It was great to begin the evening with some pure folk melodies. It sounded beautiful, mystical and spiritual, and the high ceiling of the room really helped the acoustics.

Atorc were the next band. I’ve seen these guys a few times now and they’re always fun to watch. Sadly Hellbard was not feeling his best, but quite honestly unless you knew he was ill, you wouldn’t have been able to tell. It was a great jig party all the way through, and Shield Wall was a particular highlight, with lots of enthusiastic crowd participation. Ending on Tavern Song when everyone was already quite merry was a brilliant move! 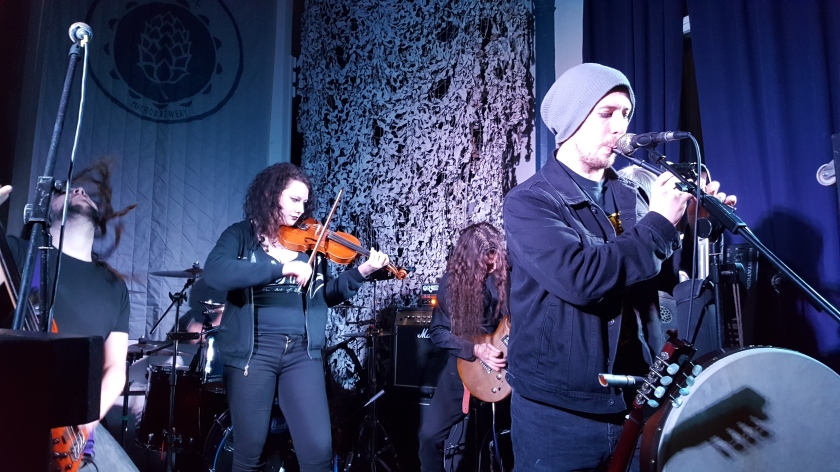 Fast becoming one of my favourite bands to see live, Isarnos were the main support. As at the Jorvik Viking Festival Special, I didn’t stop moving the entire set. I’m pretty sure this is what started my delayed bangover which kicked in on Monday when I sat down at my desk at work. Christine was back on hurdy gurdy (she was missed in York!), and the crowd loved it. There was a particularly enthusiastic (shield) wall of death, which due to the size of the room took up nearly all of it! I’m really looking forward to seeing these guys again soon – they’ll be at Warhorns Festival and HRH Vikings for sure.

Now the main event – Grimner! This tour was the first time they had played in the UK, and I had been listening to their latest album Vanadrottning almost continuously since it had been released. Martin (clean vocals, guitars) was also kind enough to get me on the guestlist as press, so big thank you to him! I started out at the front of the stage, but ended up having my own little space at the side because the rest of the crowd had opened up a massive jig pit! I don’t do well in any sort of pit, so I enjoyed my space at the side of the stage, dancing and headbanging by myself in my own little world. Johan did some amazing pipe twirling when he wasn’t playing, and you could tell the entire band were thoroughly enjoying their time on stage. They sounded amazing, and they played some of my favourite tracks (Eldhjärta and En Fallen Jätte to name but two), and this set really cemented my bangover suffering for the next few days. (Spoiler alert: It was worth it!)

I really hope to see Grimner back in the UK again soon. There were chants for Bloodstock, and they would be a brilliant headliner for Warhorns Festival in the near future. This show was probably one of the most energetic shows I’ve ever been to, and at the next available chance, I’ll be seeing all of these bands live again.