The festival for me just got better and better as the days went on. Here is my own experience of the Saturday and Sunday.

The Weather Got Worse 😦

Sadly I missed out on the arena for most of the morning and early afternoon, due to the rain that just didn’t stop for a while. Eventually the rain stop and we evenutally ventured out into the arena for some bands.

Orden Ogan were the first band of the day for me on the Saturday, and they were one of the highlights of the festival for me. They were so full of energy, and even though the vocalist had a broken thumb and couldn’t play guitar, it was an amazing show (who needs bass?!). I couldn’t get The Things We Believe In out of my head, and I had a good dance and singalong with them. I’m very glad I got to see them with my Camp Hobbiton friends too!

I treated myself to Rock Society again this year, and so I was allowed to enter the Serpent’s Lair VIP bar. There was an excellent selection of ales and ciders as usual, with plenty of seating, and PROPER TOILETS WITH RUNNING WATER!!!!!! I met up with a couple of friends in there, and had a bit of a catch up, so it was all good. As usual, I didn’t spend enough time in there to fully appreciate and experience the area, there’s always next year though!

You can’t really see Alestorm in this photo but I think the inflatables covering the view gives you a pretty good idea of how fun their set was. You can never see Alestorm enough times, and I am sad to say that this was only my third time seeing them live. The good old inflatable duck was back, and the amount of inflatables in the crowd was incredible (as you can see from the photo). The circle pit even managed to grind to a halt for some reason unknown to us poor people at the back! They didn’t have a long enough set, and it would be great to see them back as headliners or special guests in the next few years.

Sadly, after Alestorm I started feeling really sick with a headache and generally rubbishness. One of my very good friends got me back to their tent so I could have some painkillers and a sleep for the rest of the evening. But I did manage to make one more band on the Saturday, and I am very glad I did!

I am so very, very glad I felt well enough to see Orphaned Land after a quick refuel of chips and gravy from the pie stand not far from the Sophie Lancaster stage. I had listened to some Orphaned Land before the festival but quite honestly had never really given them a proper listen. They were probably one of my favourite bands of the entire festival. Their set was amazing, it was almost spiritual at times. There is so much of Orphaned Land’s back catalogue I need to visit and explore, and I certainly hope that this will not be the last time I see them live. Along with Arkona, this band show that metal has no borders. It doesn’t matter where you come from, if people love your music, they will love you.

Mr. Big were certainly not a band you would expect at a festival like Bloodstock, but on a Sunday afternoon when everyone is still recovering from a little too much partying on Saturday night, they were a good way to wake up and get some good vibes back. The guitar and bass work was insanely good, it’s very rare to find two people in the same band who can play that well. There were a couple of songs I knew of, and I did enjoy the set. It was a great way to begin my Sunday bands.

I have seen Devildriver a few times at festivals, and I joined my camp neighbours to watch them for a little while before a band at the New Blood Stage started. As usual they had a great stage presence and energy, and their music was unrelenting, with continuous pits throughout the entireity of the time I saw them. 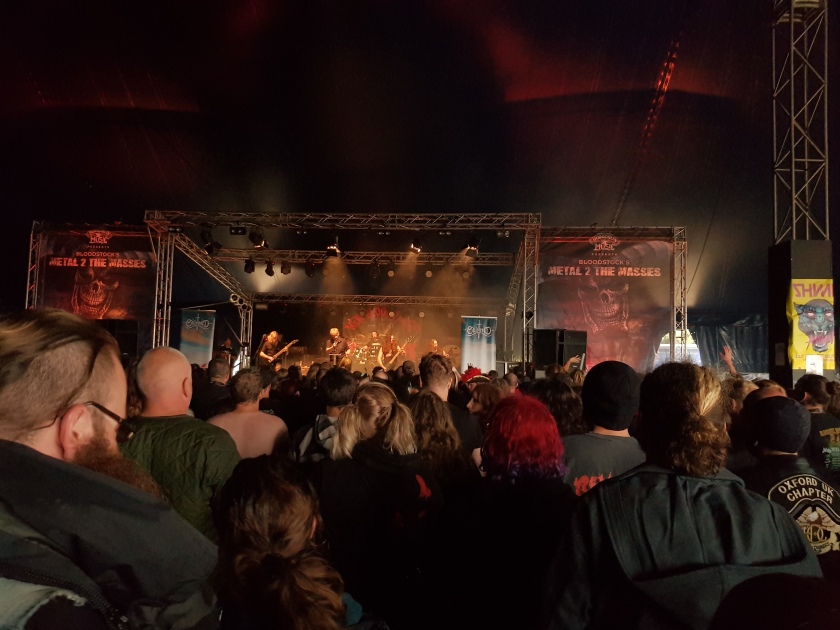 I have known the guys in Sellsword for quite a while now, and this opportunity to play the New Blood stage at Bloodstock had been a long time coming for them. Honestly, there were some times that they weren’t at tight as I’ve seen them, but considering how long they had been waiting to play this festival, how much their set had been hyped up with the trebuchet, and packed out the tent was to see them, nerves may have played a part. The crowd loved it and there were many swords and t-shirts fired from their much anticipated trebuchet. The enthusiasm from both the band and the crowd was amazing, and they thoroughly deserved every cheer they got.

Nightwish were the band I was most looking forward to over the entire weekend. When they got announced at the festival last year, I may have jumped up and down and got myself very excited about it. As soon as the full LED screen was exposed, I knew that this would be an amazing spectacle. I was once again with my camp neighbours and Nightwish would be my final band of the festival. They did play a lot from their earlier back catalogue, and I think their set time was far too short. It almost seemed like they had just cut big sections out of the later parts of the setlist, rather than more evenly spreading the songs for a shorter set throughout their career. I was very, very pleased to hear Ghost Love Score as their final track, as that is probably one of my favourite ever songs. I had a good dance, and a good headbang, and as ever Nightwish put on a great show. There were some points where the pauses between songs were just a little too long, so it did interrupt the flow a little. I just wish their set had been longer! Luckily I will be seeing them in Manchester in December!

After a bit of a rubbish personal issue, this Bloodstock did become one of my favourites. I have made some new friends, reunited with old ones, and I’m looking forward to Warhorns Festival even more now I have more people to enjoy it with!