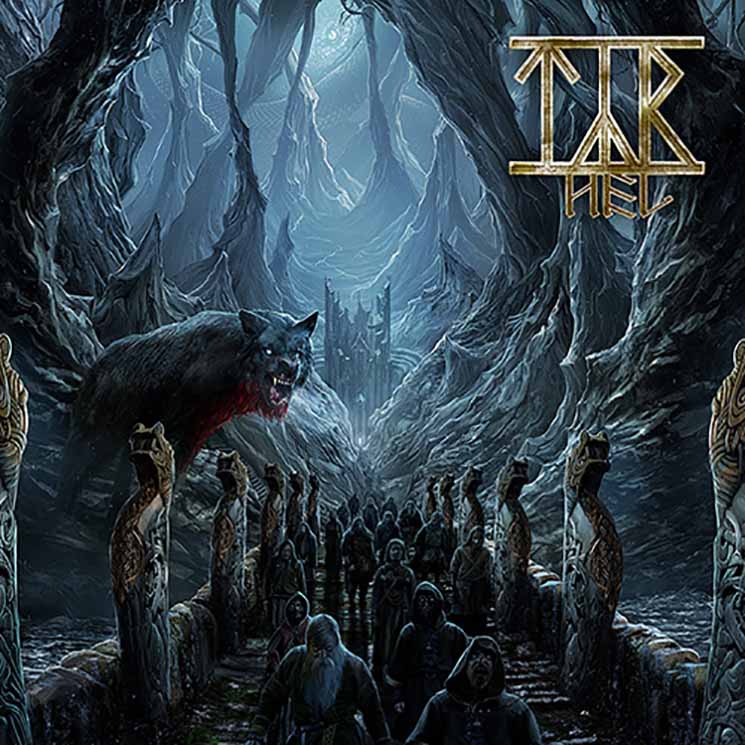 After five and a half years, Týr are finally back with their 8th full length album, Hel. I have been a fan of Týr for many years, and I was very, very excited when they announced that they would finally be releasing a new album this year.

We first enter the Gates of Hel, with an acoustic beginning with a definite Týr twang, and then the electric guitar comes in over the top, and when the full instrumental kicks in, there is absolutely no doubt that Týr are back. There are some harsh vocals which I’m not used to hearing in Týr tracks but they work well, and we finally hear their latest show opener. The solo is exactly what you’d expect from Týr, and it’s a track prime for headbanging. All Heroes Fall kicks straight in and is even heavier than the first track. The technical work is also absolutely solid.

Ragnars Kvæði is a traditional Faroese ballad from which Týr had used three verses of over 100. It starts with an acapella, much like the style of Sinklars Visa. The guitar and drum chug along nicely, and it’s just a really well composed track. Garmr has an Amon Amarth feel to the intro, but you can still tell it’s Týr. It’s a faster paced intro and a great mix on the instrumental, which is the same throughout the album.

Sunset Shore was one of the three singles released prior to the album release. It’s a much slower paced track, and in particular listening to this, I can hear the feeling and meaning behind the song. A little grit is added to the track with the solo, and I can see this being a track that I will be singing the chorus to when I next see them live. Downhill Drunk changes things up again. The drums sound like drunken footsteps, and the track picks up pace into another headbanging track. It’s about a guy who’s drunk and doesn’t care, and you can definitely have a dance and a headbang to this one.

Empire of the North is heavy, gritty, and there are some faster elements. There is a lot of bass in the interludes, and a calmer section with a guitar solo. It’s another track with a catchy chorus that you can sing along to. Far From the Worries of the World has a headbanging intro and the vocals start out almost whispering before becoming the more usual Týr sound. It’s another fast paced track with a catchy chorus, and I can definitely see there being pits if this track gets played live. King of Time has the guitars on their own, which feels like it is precluding something bigger, and it is. You get blasted with the full force of the instrumental, once again it’s a catchy track to headbang to.

When I first heard this next track as the first single release, Fire and Flame, I knew Týr was back and they hadn’t lost their edge. It’s a solid heavy intro, and an overall powerful track. Against the Gods has some classic feel Týr guitar work, and the vocals almost sound like a combination of harsh and clean in one voice, more so than usual. It’s a slower paced track but it’s still heavy. Songs of War has some really fast guitar work, and fast drums. The guitar slows a little during the verses, but the drums are still fast paced. The bridge gets almost sludgy but it still has that Týr feel.

The final track, Álvur Kongur, I believe is another Faroese track. It starts with the guitar on its own, and then there is an epic sounding build-up, and it ends with an amazing long instrumental.

I have been a very long time fan of Týr, so I had really high expectations for this album. And they were met, spectacularly so. Týr are back with an absolutely stunning album which is not only brings something fresh, but also keep true to the classic Týr sound. They are well and truly back on my music rotation, and I can see this as yet another contender for album of the year. Týr never fail to impress, and I very much hope that I will be able to see them again soon.