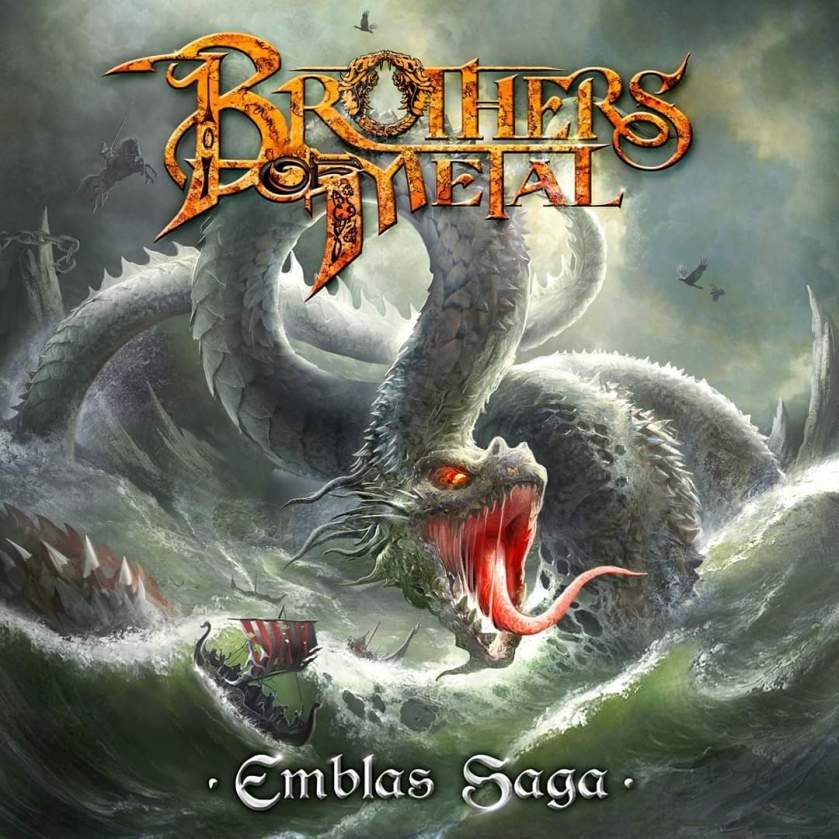 Brothers of Metal were a band that I had heard the name of, and the odd song had popped up in my recommended songs in Spotify, but I had never really given them a proper listen. The release of their second album Embla’s Saga was a prime opportunity to get stuck in.

The introductory track Blood of the Trickster welcomes the listener with a tale of caution; crackling fire and spoken word is accompanied by atmospheric and foreboding orchestral elements. Powersnake follows straight in, telling the tale of Jormungandr, the fabled serpent of Viking mythology. It’s a mid-tempo, marching and power fist kind of track, with leading female vocals, and harsh and clean male vocals providing a rounded backing.

Onto Loki’s second child, Hel. It’s a heavier, faster track with a more foreboding atmosphere. There’s a dwarven style male chant towards the beginning, and plenty of opportunities for headbanging and some calmer sections throughout. You definitely feel the sinister vibe of this track. And Loki’s third child, the Chain Breaker has a more energetic tempo, with gritty male vocals. They’re not quite clean and not quite harsh, they’re a little bit in the middle. There’s definitely opportunity for live audience participation with “Chain Breaker!” shout in the chorus.

Kaunaz Dagaz is another track with an epic feel. The clear, calm female vocals contrast with the headbanging mid-tempo energy of the instrumental. It almost has an Ancient Bards feel to the lyrical sections of the track (not a bad thing!). Then we witness the Theft of the Hammer, one of my favourite stories from Viking mythology. Thor disguises himself as Freya to obtain his stolen Mjolnir, and the track reflects this fantastic story with a fast tempo and high energy. It’s not a track that immediately hits me as amazing, but I can definitely see it as a track that would grow on me over time.

The obligatory ballad is up next, Weaver of Fate. The music fits the theme and title of the track, but I have to be in the right mood for ballads, and when I listened to this album, this was not the mood I was in. However, I can definitely see this going down well live, with lighters and phones in the air.

Njord seems to follow on from the ballad theme of Weaver of Fate, with a storm brewing in the background. However, we are back to hard hitting mid-tempo power metal. Unusually for this album so far, the harsh male vocal dominates, with slightly calmer instrumental sections for the female vocals. The chorus is prime for headbanging. The title track, Embla’s Saga, is an epic tale all of its own. Crackling fires and spoken word invites us in, while drums and guitar start to build the tension. It’s a very theatrical track, and there is more balance between the male and female vocal. There are varying tempos and feelings in this track, with calmer sections and more dramatic sections almost competing.

Probably the most cheesy and mighty track on this album, Brothers Unite has a catchy drum rhythm and makes you want to bounce around the room. It’s a great motivational track, full of opportunity for live interaction. And, being a sucker for group vocals, the Swedish male group vocal does it for me! Another triumphant start for One, with brass, strings, and choral vocals, leads into a mid-tempo track with a gritty male vocal. There’s a great emphasis on the chorus, with the instrumental playing around the words. Give it a listen in the video below.

The penultimate track, Ride of the Valkyries, has a hard hitting intro with both male and female vocal, and it’s a track with a much faster pace than we are used to in this album. There is a slower section to break up the speed, before it builds back up. Finally, we are taken To The Skies and Beyond. There’a catchy, gallopy guitar riff in the intro, which comes back in throughout the track. There’s a triumphant feel to both the vocals and the instrumental. Although it’s another great, epic track, I don’t feel like it quite finishes the album off. After being told the great tales of Norse mythology, I feel like a short ending track, not dissimilar to Blood of the Trickster, would be the cherry on top of this album.

I am always an absolute sucker for this kind of metal, and just seeing the name “Brothers of Metal” means you know you are in for a least a bit of cheese, though we are maybe looking at a mature cheddar rather than the full blown Stilton of bands such as Beast in Black. I thoroughly enjoyed the album, except for the ballad (which is down to my own personal taste rather than anything being wrong with the track itself). My only gripe would be that the album needed a short ending track all of its own, to mirror the introduction. It would have rounded off the album nicely.

I would love to see Brothers of Metal live one day, and reckon that they would be an absolutely perfect fit for a headline slot at Power Metal Quest Fest in Birmingham!